Home  /  Marketing  /  The Huffington Post: The Story of How they Got to Where they are Today

Marketing Comments are off

It’s always interesting to view a company’s history from a bird’s eye view, so to speak; to look at the company it’s become and look back down the road from its infancy to its humble beginnings.

It is in these moments of longitudinal reflection that we grow somehow. When we analyze the paths, the great entities have taken to success and the hardships they’ve encountered, we realize that we, too, maybe someday be great. This is true with some of the largest brands in the world today, like Apple, Microsoft and Walmart.

Today, we are looking at the history of The Huffington Post, an online news media giant that once started with not much more than a pen and paper and a couple of writers. Also be sure to check out our full infographic at the bottom of this post. 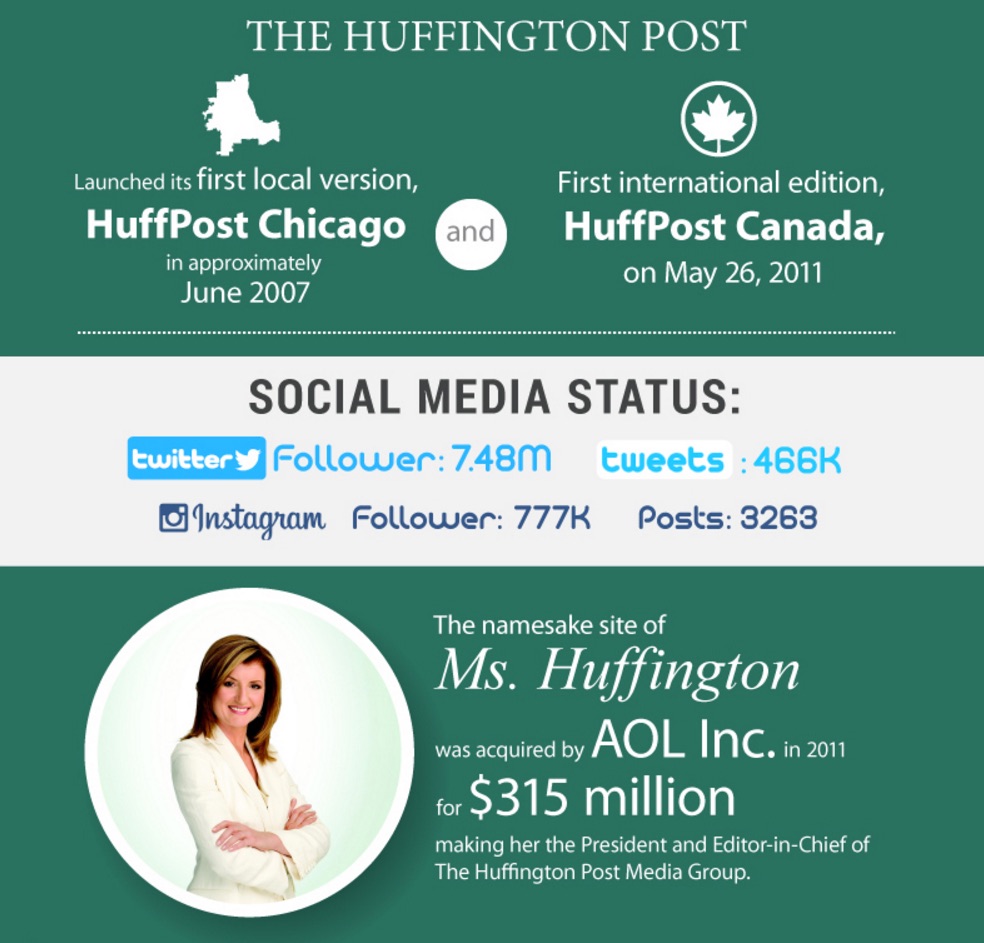 The Huffington Post began in May of 2005 by a lady named Arianna Huffington. She saw the potential of creating a dedicated news service that would offer an alternative to such previous news blogs such as The Drudge Report.

The Huffington Post evolved from a site known as Ariannaonline.com, which was a dedicated news service that brought much of the content of her former site, Resignation.com, which had one purpose: to get then President, Bill Clinton, to resign.

The Post offered a more conservative alternative to the more liberal online press and attempted to maintain control of online news stories that they felt had a liberal slant.

The site was popular with an actively engaged reader community. It enjoyed over one million comments each month even from its early beginnings.

In an attempt to maintain control of observations, that they felt damaged their publication or the conservative effect they were trying to achieve, they banned anonymous comments in 2013 so that only known users could make comments. This created a strong sense of accountability on the part of users and discouraged foul play in every way. In August 2006, the online publication announced that SoftBank Capital was to invest $5 million in helping with expansion plans. The plans included hiring more staff to keep it up-to-date 24/7, in-house reporters to maintain the news fresh and current, and a multimedia production team to create video reports.

Video blogging was just beginning to gain in popularity by this time, and The Huffington Post wanted a part of this. The Post did succeed in expanding to include more dedicated journalists, media people, and local news reporters, to bring their company to new heights as an authority in online journalism and news.

In 2011, however, AOL purchased The Post for $315 million. They decided to keep Arianna Huffington on as Editor-in-chief. She served them well and in the following year (2012), Arianna and The Post became the first the first commercial-based online newspaper to win a Pulitzer Prize. Not only did the Huffington make history in these middle years of their existence, but they also set a precedent in web rankings. In July 2012, they were ranked #1 on the 15 Most Popular Political Sites roster eBizMBA Ranking system, which gives credit to the Alexa Global Ranking system for their standards.

The Huffington Post was not only popular among internet fans, but also globally. There were Canadian, United Kingdom, and French versions of the publication as well in their respective locations. Regional attribution also occurred when they launched HuffPost Chicago in June of 2009 and HuffPost New York the same year.

One thing that always happens as a company grows is that it takes on the personality of all of the investors and patrons involved. It’s inevitable. So in 2011, after AOL acquired the publication, readers started to see changes in its topics. There were special interest groups represented such as Black Voices, Latino Voices, and Gay Voices, which addressed the issues popular among these special interest groups.

Despite its early conservative beginnings which wanted to force a moderately liberal president into resignation, this publication was now taking on liberal causes that threatened the very fiber on which the company was built.

However, Arianna and her team attempted to equalize the liberal slant by having special guests as bloggers and columnists such as spiritual author, Craig Taro Gold and fitness and health expert, Jeff Halevy.

The publication continued to enjoy success and had few financial setbacks. They seemed to address the issues that everyone cared about and truly developed a brand among internet publications that was hard to beat.

Bumps in the Road

Looking back over these happenings, it seems the Huffington Post had pretty smooth sailing in the earlier days. But, as always happens with any business or any kind, there are a few obstacles that they must get past. Scientific journals and scientists from the medical community began to question and challenge some of the information The Huffington Post was putting out and labeled it “pseudoscience.” This drew attention to the alternative medicine and alternative therapies posts that the Huffington Post had put up in the past to address medical concerns that people reported.

Dana Ullman, a known homeopathy expert, had a regular column in The Huffington Post where she offered alternative therapies and natural remedies for common maladies. This pointed out the idea that perhaps the Post had finally gone too far and had crossed over into an area that was not news, but opinion and theory.

In journalism, integrity should win out. With the Huffington Post, it did, when they decided to withstand the criticisms of the scientific community and allows their alternative experts to continue telling people about home remedies and natural medicine. After all, they thought, if it’s news, it should be told to the people, whether it is popular or not.

This thinking that embraces all views, not just one, has earned them numerous awards and accolades over the years, despite the pressure from outsiders who, for whatever reason, wanted to bring them down.

Likewise, regarding political issues, Huffington Post founder and now Editor-in-chief, Arianna Huffington, has stated that the Post will not take a definite stance politically in how they cover the news, even though their original opinion had a conservative slant.

How did they do it?

Through perseverance. Through dedication. They kept their eyes firmly on their cause and their position. They didn’t waver. They may have changed through time and embraced ideas and standards that they wouldn’t have done before. But through this, they grew.

They maintained the integrity of their roots, while not bowing to the pressure of outsiders. They stood their ground.

As of today (8/11/16), it was reported that Arianna Huffington would be stepping down from her position at the Huffington Post to launch a new health and wellness site. The history of The Huffington Post, just like the history of your company, it could be told well with a historical timeline, as well as in the form of an infographic. The professionals at http://www.InfoGraphicDesignTeam.com can create this for you. Think about how people could look back on your business years from now and see how far you have come.

Contact us today and tell your story, then see how we bring it to live through visual presentation. Forget text content, tell your story with pictures and facts about your history.

Perhaps the Huffington Post will even publish your story for you.