Facebook News Feed has experienced a fundamental shift in 2018. This major change in the current year will prevent the loss of time associated with the passive reading of articles and watching videos on this social platform. This shift of Facebook is the big focus of this year for users as well as publishers.

Mark Zuckerberg informed the world about this massive alteration on 11 January, 2018. According to him, Facebook plans to return to its core state – helping users have “more meaningful social interactions.”

This facebook news feed changes will occur with recent updates in a Facebook algorithm. The goal of the News Feed will move from the idea of enabling one to find relevant content to allowing those have meaningful social experiences.

As a result of this recent changes to Facebook, posts from brands would not appear in the newsfeed section anymore. Now, news feed algorithm will prioritize posts from friends and family over public content to the users. However, online marketers would be at a loss with the announcement of this news. It might pose a significant threat to publishers. All would be apprehensive about the future of this drastic change?

Many media professionals, who have been using Facebook for content distribution and the purpose of monetization may be worried about this change. But here’s what to expect from this Facebook update:

Let’s take a look at Facebook news feed and its requirement today. 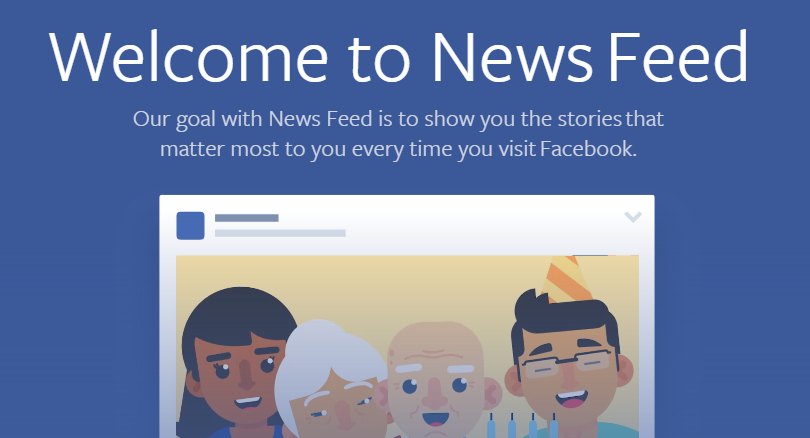 The Facebook news feed is the center column of a Facebook user’s home page. It’s the list of updates seen on an individual’s Facebook home page. The news feed shows recent information modification about those people who are in a person’s friends list. In addition to that, it’s the section to display updates of all kinds of business advertisements.

Facebook, the social networking site has this dedicated section ‘news feed’ mainly to act as a compilation of events from your friend’s own ‘Mini-Feed.’ This segment was created with an intention to provide the user a quick look at what his/her friends have been doing on the social site.

Introduced in 2006, it became a helpful and user-friendly feature of Facebook. But gradually this updating feature induced a concern among users. FB users of those times feared that these updates would make it easy for others to track an individual’s activity on Facebook. Therefore, Facebook news feed was thought to intrude the user’s privacy.

To fix this issue, Facebook changed its features in 2010. According to the then changes, FB allowed users to customize their personal updates. Moreover, users could also customize how much they would want to hear from their friends.

Since then, the news feed has become an essential feature in Facebook to keep the site both dynamic and interactive.

Today, what a Facebook user sees on his or her news feed is controlled by an algorithm. This algorithm is responsible for highlighting factors-how many people are commenting on a specific piece of content. This section also updates information on who posted a particular material and what type of content it is. Users can also apply some control over their feeds by adjusting the news feed Facebook settings.

Now this news feed algorithm of Facebook has changed.

But, why this change?

Facebook’s News Feed change is planned to create a better user experience for its users. This modification aims to develop meaningful interactions between people. The primary goal of Facebook is to reassure its users that now they can exchange quality information with their friends and families.

But until recent past, Facebook didn’t serve the same purpose with what ideally it was created for – ‘relationship building strategy.’ Facebook had become a destination for users only to scroll passively without any function.

Techcrunch reports Mark Zuckerberg commenting on this issue as, “ Time spent on the platform has lost its luster as a key metric for Facebook.”

Reports and stats showed that if this social platform starts attracting daily active users portraying profound social and emotional nature, it would be far more valuable to Facebook.

Facebook survives on this active, engaged user base aspect. Of late Facebook realized that audience who just visit and scroll without any meaningful activity are useless in the long term. Time spent engaged with better quality content would be more valuable. Hence, FB has taken this strategic approach to increase the profit of the site.

Initially, Facebook helped people stay connected and brought closer together who mattered more. Research shows that strengthening any personal relationship improves one’s well-being and happiness. At this well known social media platform, friends and family always remained at the core of the experience.

But recently it is seen that posts from businesses, brands and media have overpowered the personal moments. This is affecting the true nature of Facebook- the act of connecting more with each other.

Video and other public content have exploded on Facebook in the past couple of years. There are more public posts than materials from friends and family. The balance of what’s in News Feed has shifted away from the most important thing Facebook can do — help connect each other.

Zuckerberg hence stated that it’s a huge responsibility of the creator. He wanted to be sure that the services aren’t just fun to use, but should be used for people’s well-being. Following the recent changes to Facebook, Zuckerberg also reports, “time spent is not a goal by itself here; what we want to go for is time well spent.”

Surveys and research prove that when we use social media to connect with people, we feel more relaxed and less lonely. The Facebook owner says that this feature correlates with long-term measures of happiness and health.

Conversely, passive reading or watching a video, though they have the elements of information and entertainment, is detrimental to mental health. Based on this, the founder has planned this significant change in the news feed facebook settings. There shall be less public content like posts from businesses, brands, and media.

Since last year this change came into being but finally it was announced recently. Expect to witness this massive change in News Feed and expect to see more from your friends, family and groups.

As a user it is quite natural to pose the question, how to get new Facebook news feed. It’s very simple just find out.

The “New Facebook” has a news feed facebook settings that by default shows posts from your most interacted friends and family members. Thus, you would only view posts from your friends/fans with whom you have communicated recently. The bottom line is – a user would not see posts from contacts with whom he/she has infrequent interactions.

Here’s a simple guideline to solve your ‘how do I fix my Facebook news feed’ problem.

The solution comes from Mark Hull, a Facebook enthusiast,

On the homepage, scroll down to the news feed section

Using this guideline, you will be able to see posts from your friends and family. Content from pages and businesses will appear at the bottom of the feed.

Hope you get your answer on how to get new Facebook news feed.

Impact on publishers of the Facebook news feed changes

Facebook has been one of the most critical marketing tools of all times. It has estimated 2 billion monthly active users worldwide. In recent time Facebook has emerged as a platform to help publishers who seek to grow their audience.

This extensive modification by Facebook will prove to be quite critical for any business.

Entrepreneurs always aim to connect with people meaningfully and this facebook news feed changes will result in a significant uproar among them.

How should a publisher survive this change?

To win in a shifting social media environment, publishers will need to lessen their dependence on Facebook to generate audience traffic. Because this strategy will decrease the traffic.

A publisher can take advantage of clickbait images. However, those who are genuinely presenting quality content with a good user experience will have a chance to pull through.

This initial decline in traffic will no doubt recede over time since users will still seek a solution to find and consume publisher content.

Audiences would desire for more content from their favorite outlets and from brands they trust. Publishers who have already gained the confidence of their target audience can provide this solution by focusing their content distribution and monetization outside the Facebook News Feed.

How marketers should respond

Content monetization helps publishers in establishing their brands among their target audience. Hence, a publisher needs to innovate their advertising strategies as well. Every publisher should look to offer advertising solutions that better actively engage users.

With the facebook news feed most recent change publishers have started realizing their need to differentiate themselves in this highly competitive market.

The change of Facebook newsfeed will bring about a considerable makeover in the world of publishing. However, the shift taken by Facebook doesn’t mean that the ads will go away. With the recent update, all personal and relationship contents will be placed at the top and business texts would go at the bottom of the feed. Publishers will get hampered initially, but ultimately, those who create more emerging forms of content will win audiences and ad dollar.