The human brain processes visuals 60,000X faster than plain text. If we talk about visual metaphor examples, we need to go back in time to the early cavemen. This fact is clearly evident from the colossal cave paintings drawn by them. Those were some mesmerizing artifacts created by human beings at their crudest best!

Now we have a plethora of media to communicate, interact, and convey our deepest feelings. Usage of visual allegory and metaphors is far more common now to alter the usual perception of people and urge them into doing certain actions.

The advertising media tends to go over the top with creative advertising and campaigns to achieve the desired effect on their target audience. To leave a lasting impression on the viewers and goad them towards making a purchase, the visual metaphor is a powerful option.

But what is a Visual Metaphor?

As we know, a Metaphor is a figure of speech that refers to one thing by mentioning another. Metaphors are mostly used to create speech rhetoric, that identifies the hidden similarities between two ideas. Likewise, a Visual Metaphor is a creative representation of a person, thing, concept, or an idea through an analogy or association.

Usage of Visual Metaphor and Visual Allegory in Ad Campaigns

When advertisements are created metaphorically, the audience can sense the original/familiar idea and strike similarity with the new imagery they are viewing. This is purely a psychological effect and because of it, the advertising industry is turning towards visual metaphors in their content. But this is not as easy as it sounds.

Creating a visual that resonates with the audience is a great challenge. One needs more than just a software to come up with such an interesting and memorable creative ad that sticks in the audience’s mind for years. There are quite a few advertising houses that have created stunning ads and ad campaigns that are incredibly metaphoric and hit the audience in the right place.

To learn from the maestros and harness the art of visual metaphor, let’s check some of the best visual metaphor examples around the world that have taken creativity to the next level.

One of the very first examples of visual metaphors is Volkswagen. The renowned German automobile company paid tribute to the 1970s Jeans Bug. The unique denim accents of their Beetle Denim cars were made to look like the dashed lines on a highway.

This visual metaphor is more like a simile that strikes a similarity between two different elements. However, though the inert concept is different, how the two ideas are perceived becomes similar to the onlooker. 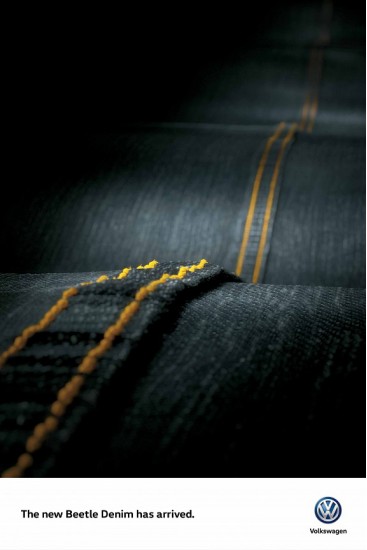 Just like it’s difficult to thread a needle and requires acute perfection, driving or navigating through a busy city is similarly challenging. However, an electric-power car by Smart can manage easily through the narrowest of lanes. Quite impressive, right! 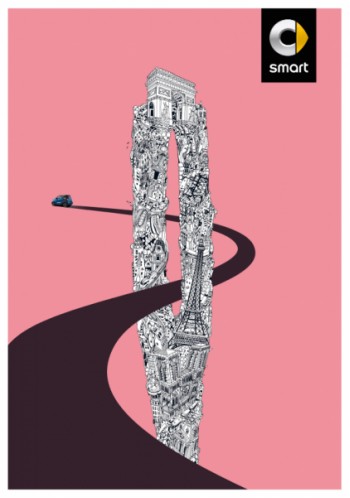 3. The Ad campaign by Save the Children

Every traumatic experience sows a seed in the deepest core of a child’s heart. Which then develops into alcoholism and forms the adult life of the abused kid. In short, “Nothing Good Grows From Violence”.

Well, such deep and sensitive thought is showcased perfectly through a visual by Save the Children. Usually, creativity comes from minimalism. Hence, there’s not much room in an ad to fit in a large number of graphic elements. But even being minimal, you can tell stories just by adding a visual metaphor. 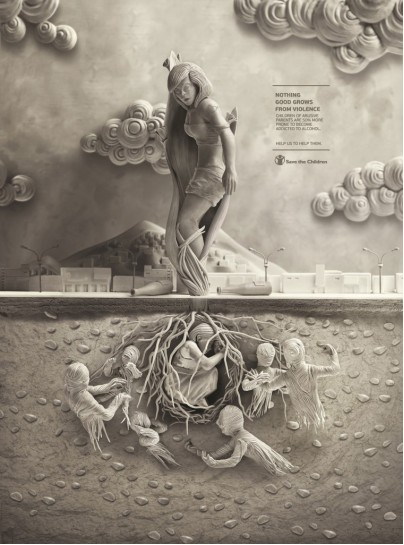 Diniz, the largest eyewear chain store in Brazil, came up with this innovative idea of using double meaning in their ad campaigns. The double meaning metaphors can express two ideas through one single visual.

Though symbolic, these ads have leveraged the freshness of tropical fruits to introduce their summer eyewear collections. The intended message was unmistakable. The same freshness and soothing feeling that the tropical fruits give, the all-new Diniz sunglasses can give the same tranquility to the wearer.  To solidify their claim in the most creative manner, the shadows of these fruits resemble the different eyewear models. To establish a stronger connection, the ad copy and the visual metaphor illustration are tuned in the perfect tandem. 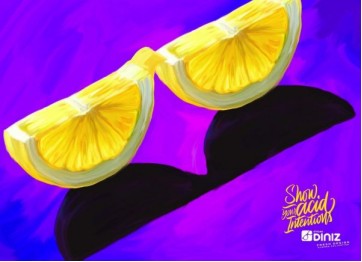 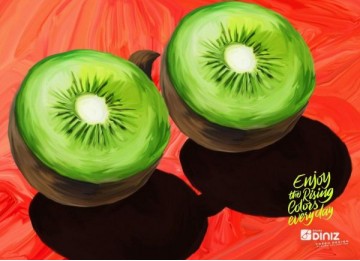 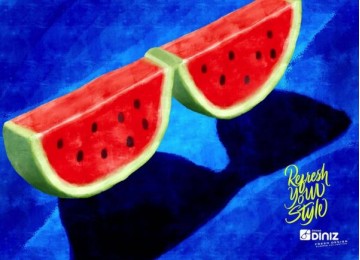 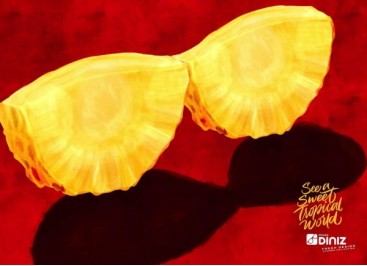 This advertisement by WWF in February 2020, on the delicate balance of our ecosystem, is an excellent example if visual analogy. Here, two completely unrelated things are compared with each other. One is our ecosystem, and the other is the game of Jenga.

The only thread that binds the two different concepts is the idea of imbalance. In the game of Jenga, if even one piece is moved, the whole structure crumbles down. Similarly in the ecosystem, even if one species goes extinct or becomes endangered, it creates an imbalance, costing the lives of all in the ecological niche.

This ad can rightly be considered as one of the most incredible visual metaphor examples to take inspiration from. 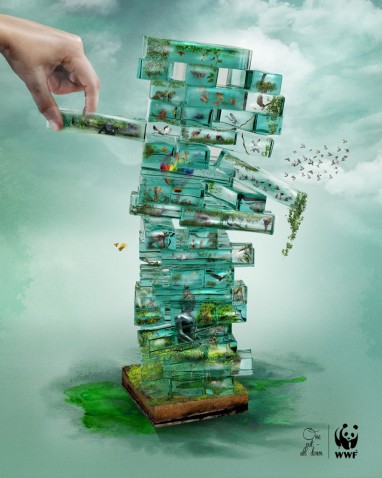 Another brilliant specimen of visual analogy is the ad campaign launched by the Dublin’s bus system plan of 2019, BusConnects. With this plan in action, the Dublin-dwellers will experience a smooth bus connection across the city. This will encourage them to travel by bus more than ever – making a significant reduction in smoke emission. Thus, decreasing air pollution in the city.

The whole message was beautifully showcased through skillful visual art. The Dublin City has been shown as a Rubik Cube, that can only be solved with the perfect collaboration between the civilians and BusConnects. 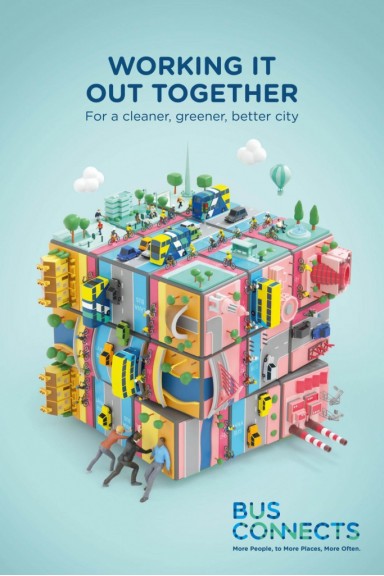 7. The Usage of Visual Effects by Jordan Insurance Company

The Jordan Insurance Company’s creative team is undoubtedly a bunch of quirky minds, who came up with this ingenious visual idea. This ad, which is quite famous for all good reasons, needs to be looked at twice to understand the meaning and metaphor.

The image is odd, yet captivating. It tells the onlooker that if the helmet is buckled open, then it is as good as not put on. This hits hard for sure! Apart from surprising and intriguing viewers, this ad also tells us about the sheer creative genius behind its conceptualization. 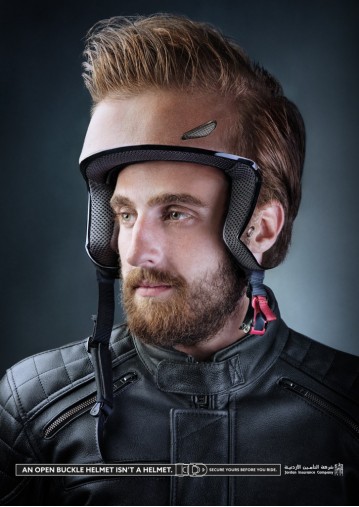 Another ad campaign must deserve a shoutout owing to its stunning visual effects, graphic elements and concept. In the 2020 Audi calendar, we get to see the car is represented as a superhero or a messiah. 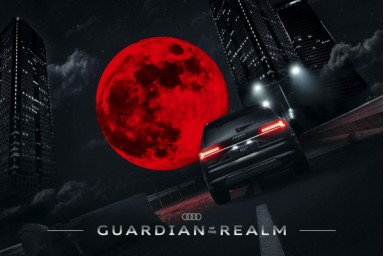 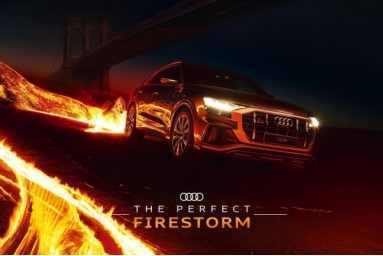 The kind of dynamic visual effects and vivid color scheme that have been used, deserve pure praise. The look and feel are that of any DC Comics or Marvel superhero movies – this aspect can resonate well with the younger prospects.

These creative ad campaigns have a profound psychological impact on the onlookers and etch out a permanent memory.

Amidst the global pandemic outbreak of COVID-19, the United Nations went on to raise awareness on practicing social distancing measures, to prevent the spread of the Coronavirus.

The image was simple. A balloon and a cactus plant pitted against each other to convey the hazards if any one of them gets too close to the other. This visual metaphor of associating everyday objects, that don’t go well with each other is suggestive of the harm closeness can do us right now.

The ad subtly makes us understand the importance of maintaining social distance. UN gives us a great example of visual metaphors in ad images. 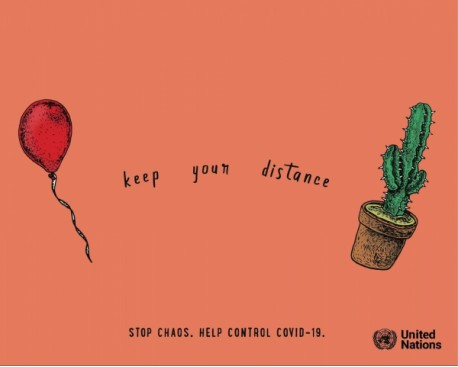 McDonald’s is quite famous in availing visual minimalism in their ad campaigns. And McDonald’s France harnessed the concept even better. They simply used their iconic french fries as a direction to their nearest location. This abstract, yet straightforward visual metaphor resulted in a captivating ad image. 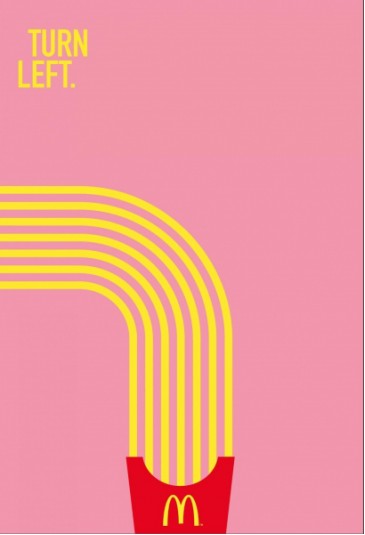 A lot can be learned from one of the ads by Tic Tac, who has amazingly utilized white space in the form of a mint. When you need to communicate with a vast number of audience, you must ensure the lowest possible usage of texts. Tic Tac has played this brilliantly! 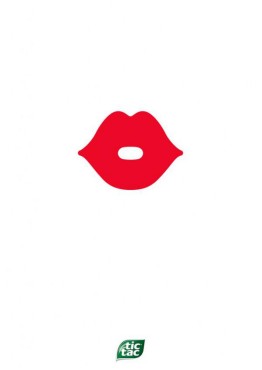 “Unbox You Life” – This is the tagline of Ikea. And the Swedish ready-to-assemble furniture and home accessories company genuinely lives up to it!

Just by effective use of mere contrast and the tagline, the USP of IKEA is duly conveyed. The audience immediately understands that IKEA is the place where you can go to experience something unique and different. 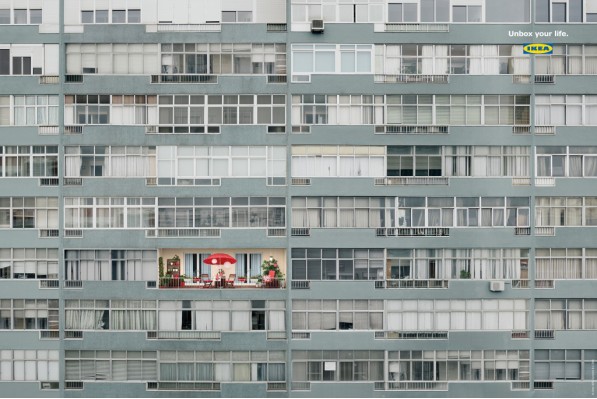 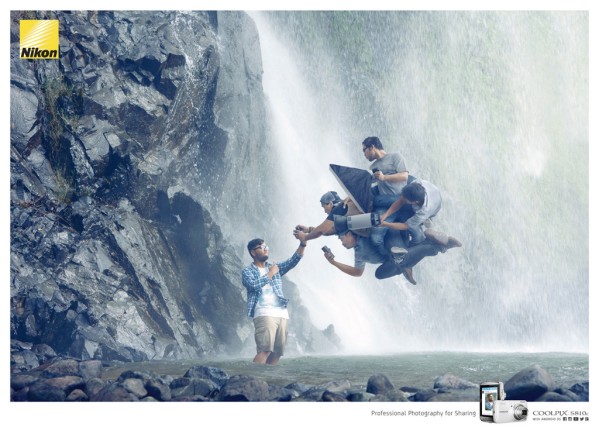 While launching their CoolPix digital cameras, Nikon cleverly crafted an ad image suggesting the extraordinary features the camera has. The image implies that taking a selfie from the all-new Nikon CoolPix, is like carrying a full team of professional photographer crew.

Persuading with visual metaphor is a potent selling mechanism, that stimulates the viewer’s senses more effectively than words. They stick with them for a long time. If you want to stand out and create a hammering impact on your target audience, leverage some creative visual metaphors for the purpose.